by Michael Correll on November 6, 2013
in Active, Research Description 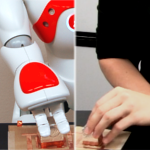 Humans ascribe meaning to motion — it makes things seem alive. The motions of robots that are human-like in form or function may make them seem not only alive, but thinking and feeling like the humans they resemble. Motions generated without taking these ascribed meanings into account may not only waste this potential communication channel, but fill it with confusing noise, or communicate something undesired. Humans may be wary of collaborating with a robot that seems careless, incapable, or threatening, or simply grow weary of interactions made inefficient because they lack the subtle motion cues we expect from other humans. Robots that can communicate their intentions or relevant context through motion may be able to collaborate more closely, efficiently, and safely.

To this end, we ask: What properties of arm motion do humans ascribe meaning to? What sorts of robot anatomies are interpreted as arms? And how tolerant are humans to deviations from expected behaviors — what can be done to clean up noisy signal, or make up for an absent degree of freedom?