How To Use LayerCake 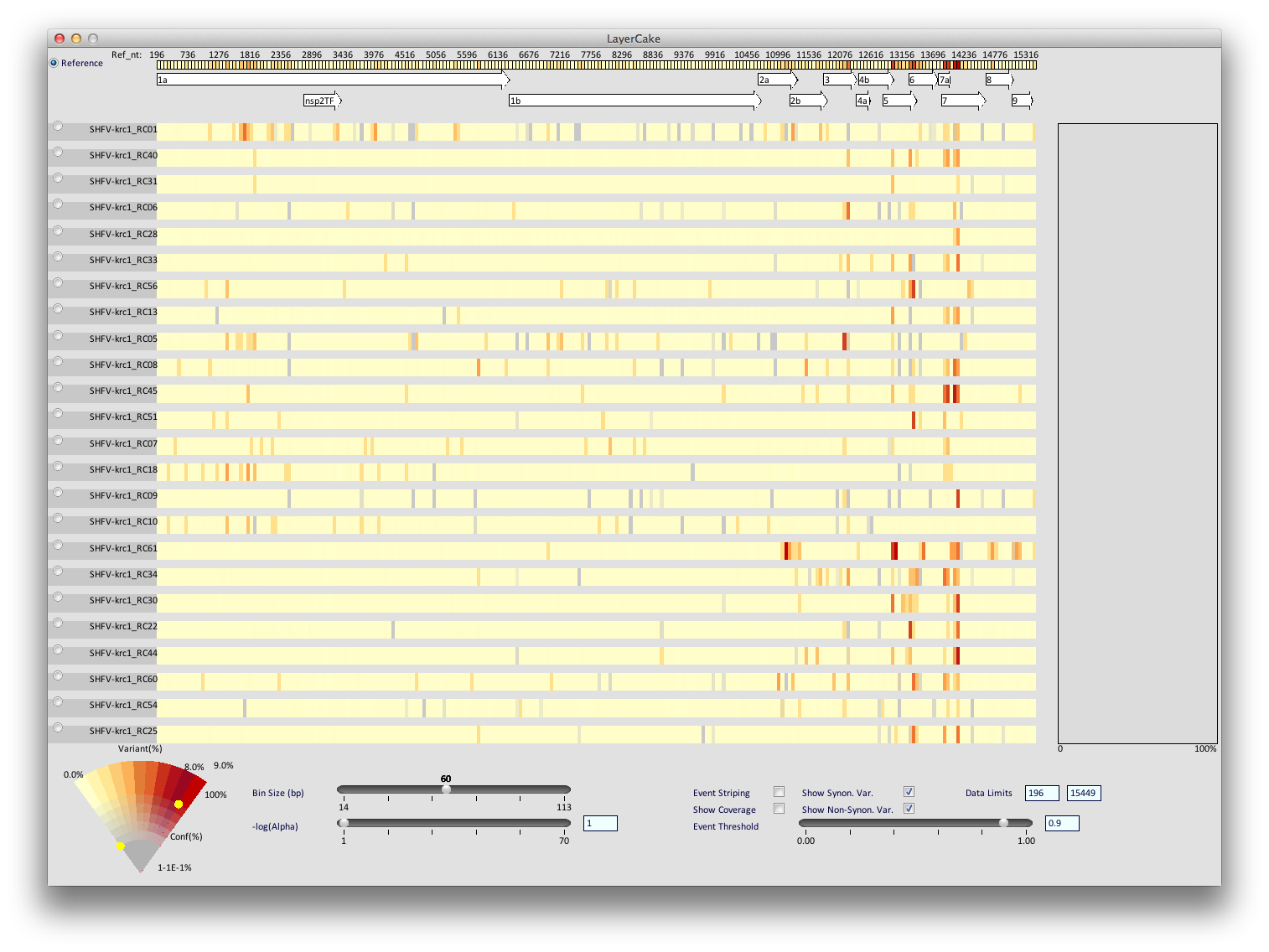 The LayerCake tool is designed to allow viewers to quickly find areas of a viral genome where many different populations have variation with respect to a reference genome. There are two main components of the tool: rows, which represent distinct viral populations (in this case each row represents the viral population within each infected individual), and blocks, which represent a particular section of the genome. Since the information for the entire genome cannot fit in standard displays, each block is usually composed of the information for multiple individual base pairs averaged together.

In the bottom left is the wedge, which is both a legend for the coloring scheme used for LayerCake and also an interaction tool that allows the viewer to change this scheme on the fly. By dragging the two points of interaction, color can be used to dynamically determine regions of interest and make those regions visually salient. For instance one could grey out regions with variance that is too low to be considered (by moving the bottom yellow dot to the right), or where there is insufficient confidence in the data (by moving the bottom yellow dot upwards).

Since by necessity LayerCake cannot show the variation information for every single basepair of a genome simultaneously on the same screen, regions of the genome are aggregated into blocks. By default each block contains information from 60 individual nucleootide locations, but this can be controlled by the user. Right clicking on a block causes it to expand outward, showing the detailed information of each nucleotide is presented by compressing the rest of the display. Mousing over a particular block, or a particular location of an expanded block, lets viewers compare behavior for every row at a glance.

Another way of retrieving smaller-scale details from blocks is with “Event Striping.” The viewer sets a threshold of interest (for instance, “locations where 50% or more of the reads are variants”) and then LayerCake will display a red stripe at the location of each event which matches this criterion, obscuring some of the block to display this more salient information. The histogram at the top then becomes colored to reflect which columns have the most events across all rows.

The bottom of LayerCake contains sliders and input areas for controlling the parameters of the display. Here is a description of each one:

By clicking and dragging the grey labels associated with each row, you can reorder the display order of rows in LayerCake. This allows the viewer to group and compare individual populations. Right clicking on the label will allow you to annotate it with one of four colors to further assist in labelling and reasoning about groups.

Clicking the radio box attached to each label will set that label as the new reference. By default, a read is counted as a variant if it conflicts with the consensus sequence for each individual. By choosing a particular population as a reference, it changes the definition of variant to mean the difference in read populations between one row and the new reference. e.g. if 50% of the reads at a location on the reference are “A” and 50% are “T”, then a population of reads that is 100% A will be 50% different from the reference. This allows viewers to compare populations at a glance, and make claims about homogeneity of groups. For instance if there is a point that is very red in the default view, but remains red when a new reference is chosen, we can determine that not only are there variant reads at that location, but that those reads are highly idiosyncratic across a particular set of populations (since not only do they differ from the consensus sequence, they also differ from each other). To return to the default view, click the radio button next to the word “reference” in the upper left corner of the display.